This is the first installment of Coin Center’s multi-part travel series examining how cryptocurrency is used around the world.

At the southernmost tip of Africa, Cape Town is far from the world’s major economic centers. Yet ‘Silicon Cape’ is home to one of South Africa’s most active startup communities. It is a point of exchange for a new generation of internationally-mobile, entrepreneurs and developers. Rather than exchanging precious metals or spices, as was done here in the past, they instead exchange digital resources, open-source knowledge and technical know-how.

A burgeoning community at the tip of Africa

The cryptocurrency community has grown quickly here. An early member, Sonya Kuhnel, recounted her experience meeting with blank-faced executives in the banks over the years. “I could get meetings with higher-ups but then they would laugh me out of the room”, she told me one afternoon. Sonya started the Blockchain Academy and Blockchain Africa Conference in 2015. Now the periodic Bitcoin Meetup, which she organizes, has a membership of over 700 people. The banks are some of the Academy’s biggest clients as well.

A number of people act as international connectors between Cape Town and the rest of the world. With contacts in Berlin, Devon Krantz has played a major role in building and connecting the Ethereum community in Cape Town. Devon co-founded Linum Labs, which provides subsidized training to people looking for job opportunities associated with cryptocurrencies. Their first hackathon, held in January, attracted over 80 participants. Most were in their early 20s, around 15% were female and almost all were South African.

Every few weeks Linum organizes a meet-up of the Ethereum community. Rodney Pedro and Santosh Sewlal are the new Ambassadors of this group. One evening over pizza, we discussed how interesting it is to see a round of technological change occurring outside of Silicon Valley. They thought people in Cape Town stand to benefit given that much of the cryptocurrency/blockchain technology is open-source; the availability of fiber internet in the prosperous parts of Cape Town; and the recent migration of a young, skilled workforce from Johannesburg or from abroad seeking Cape Town’s beaches, weather and a better quality of life. 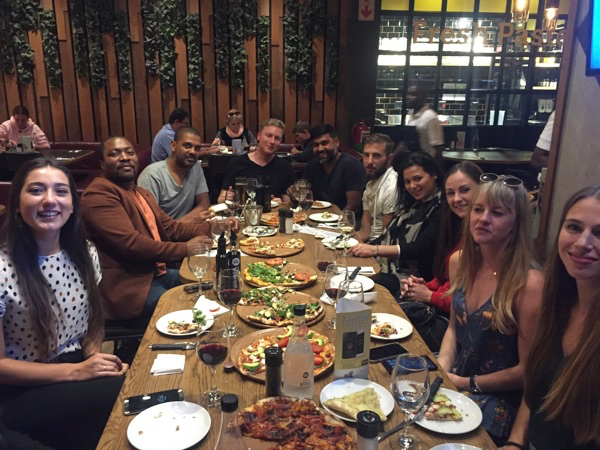 Another international connector is Co-Pierre Georg. He helped create the first MPhil program in financial technology at the University of Cape Town, which has a course on cryptocurrencies and blockchain. “The initial demand for the program was overwhelming”, he told me on the phone one day. “Over 300 applications were received for approximately 15 positions”, he added. All of the course notes for their ‘Fintech and Cryptocurrencies” course are available online for those who may not have been able to get into this class but nevertheless would like to get involved in this space.

These people are drawn-in by the promise that this new technology might hold to address the many issues faced in this corner of the world. Devon takes a positive spin: “there’s a lot of things wrong in South Africa but that means there’s a lot of things to fix”. Co-Pierre would agree. “Instead of nationalizing the banks or re-appropriating land,” which are commonly proposed solutions to longstanding structural inequities in South Africa, “blockchain might offer an opportunity,” for traditionally disenfranchised people to use their new skills and talent to earn a living. 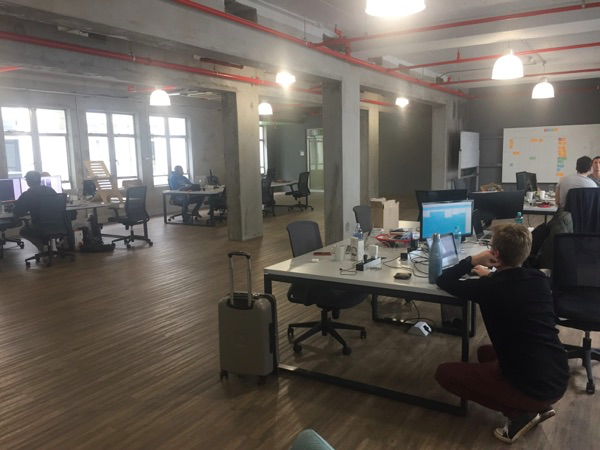 For a town that has hosted a lot of trading and commerce throughout its history, I could only find a couple of businesses, like Alexander Bar or Lunchworks, whose owners accept Bitcoin for purchases. At trivia one Wednesday night, the owners of Alexander Bar knew who I was because I had previously paid for the tickets with Bitcoin. They explained to me that, “we started accepting Bitcoin when the Luno employees asked to pay in Bitcoin”. (Luno is the main fiat-to-crypto gateway in South Africa. It is just around the corner from both Alexander Bar and Lunchworks.) The owners of Alexander Bar had integrated the Luno API into their payments system, which meant I could also pay for the beers at the end of the night with Bitcoin.

When I stopped by Lunchworks for coffee later that week, and asked to pay with Bitcoin, the owner, Jakub Vanek, came to meet me. “I sometimes provide the lunch catering to Luno”, he explained. Using his personal wallet, rather than an API, he accepted my payment. We then spent a few minutes waiting for the payment to process, then another twenty minutes talking about his cryptocurrency portfolio, the rollercoaster ride since January and a Pokemon-Go/cryptocurrency hybrid called Crypto Hunt.

Why aren’t cryptocurrencies being used for transactions in Cape Town? In addition to the usual reasons, (e.g. slow transaction times, poor user interface, difficulties in creating a two-sided market and the incentive to hodl rather than spend cryptocurrencies) it might be partly due to the ubiquity of other convenient digital payment means in almost all stores. After all, apps like SnapScan or services provided by various mobile money operators are ubiquitous. They involve paying via QR code with a cell phone, which is exactly how one would pay with a cryptocurrency.

This question was top of mind when I met with Tricia Martinez. She is a co-founder at Wala, which provides cryptocurrency based financial transaction services at no cost to the end user. Wala successfully raised the equivalent of US$1.2 million in an Initial Coin Offering (ICO) last year and has just launched its beta platform.

“Consumers in these markets [Africa] already get what cryptocurrency is” she told me. 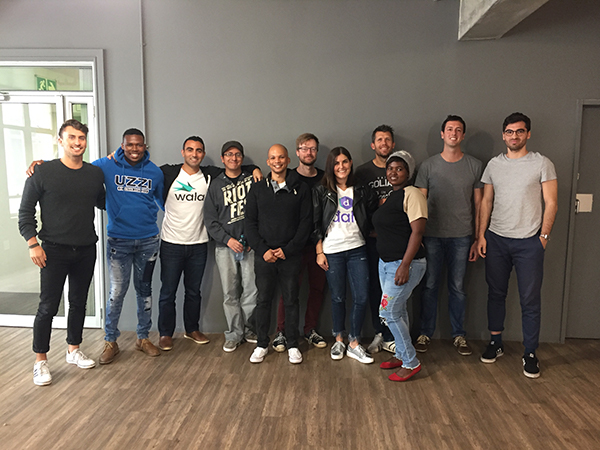 Wala hopes cross-subsidize consumer use of their platform with a fee levied on business-to-business transactions. There may be a large potential cryptocurrency market amongst corporates who do not wish to be exposed to inflation and exchange rate fluctuation. If it works, it might provide help some people who today pay well over 10% fees on their remittances to countries like Zimbabwe. Perhaps companies like Wala will deliver a user interface that ends-up driving mass adoption. If so, it is likely that these new adopters will not even be aware that they are using cryptocurrencies.

“I try explaining it to people here but they don’t understand”, was how Arnold summarized his experience ten years ago living through hyperinflation. Arnold was one of my Uber drivers, of which many are originally from Zimbabwe, over the course of the month. He continued his story about waiting in line for Mugabe government-issued, worthless, bond notes supposedly “pegged” to the US dollar, a promise nobody believed. Strange things happen when the means of exchange breaks-down. “A black market emerges, people sell the same [stolen] goods outside supermarkets at a much lower price or barter them”.

Stable stores of value satisfy an acute need in places like Zimbabwe – and many other countries around the world where the temptation to debase the currency cannot be resisted. Although many of the Zimbabweans I met had not heard of Bitcoin before, after a short explanation, they ‘got’ the concept immediately. While more traditional stores – like gold or land – aren’t likely to be entirely displaced in the land of the Krugerrand, there’s reason to believe that an intangible, widely-accepted and fungible store of value could alleviate some of the pain caused by the appropriation of property or the debasement of fiat currency in other countries in Africa.

One evening I made the trip out of town to spend time with around a dozen people assembled in a suburban community center hearing a presentation about the opportunities from mining cryptocurrency. This meeting was part of what I believe to be a pyramid scheme that involves selling memberships to the supposed proceeds from cryptocurrency mining in Washington State, USA.

The people in Durbanville were there because they saw Bitcoin and other cryptocurrencies as a way to generate higher return on investment than their savings accounts. “It is real” was repeated a many times. This emphasis was partly because, “some people were burned in South Africa with BitConnect”. To prove that the mining was ‘real’, we were treated to a video of a group of South Africans visiting the cryptocurrency mine in Washington. Watching South Africans, whose country has hosted several waves of gold, diamond and platinum mining over its history, visiting a supposed cryptocurrency mine in the USA, was a curious manifestation of how resources flow in the digital world.

This was the closest I got to people involved in large-scale mining cryptocurrencies in Cape Town. Mining is not very profitable in South Africa because of the high prices charged by the national electricity monopoly [Eskom], the unreliability of that electricity supply, the cost and difficulty of importing equipment, and insurance cost for the risk of theft of the equipment. Instead, the mining is done abroad – in places like Washington – and the proceeds are supposedly transmitted back digitally to people’s cryptocurrency wallets.

The regulators make their move on ‘cyber tokens’

With the growth of the domestic industry reaching a critical mass and the potential for scams now evident, regulators in South Africa are considering how to treat cryptocurrencies, tokens and other blockchain-based technologies (recently dubbed ‘cyber tokens’ by the Deputy Governor of the Reserve Bank of South Africa). A Task Force convened in September 2017 brought together all of the key players including the Financial Services Board, the South African Revenue Service, the Johannesburg Stock Exchange and the Reserve Bank itself. It will release its first guidance in June 2018.

I spoke with some people who attended the workshop in Johannesburg. They felt that the authorities are adopting a facilitative approach that will seek to enable the growth of this industry. Overall the community welcomes clear guidance on how to be compliant with existing securities regulation and taxation laws.

The fact that the Reserve Bank has a fintech group suggests that South Africa is emulating the approach taken in other smaller countries like Estonia or Singapore. “I’ve worked with the Bundesbank in Germany, which has four times more staff than the Reserve Bank in South Africa, and they don’t even have a fintech person”, was how Co-Pierre put it to me. Smaller countries are likely to capture some early benefits from this new technology but will have to balance this against the need for consumer protection.

Dreams of a new South Africa

Over the course of the month, I noticed that many people in Cape Town had a tendency to project their dreams onto this new technology. I heard many visions of a decentralized future without middlemen – one that might bypass the corrupt, expensive and laborious processes that plague their own day-to-day dealings. I’d also hear about a new paradigm for ownership of physical assets, like land, which is a contentious issue in South Africa owing to a history of confiscation linked to Apartheid. The perceived need to eliminate trust in third-parties appears more pressing in South Africa than in other countries I’ve visited. After the forced ejection of the President due to accusations of corruption, which has many feeling deep disappointment, this is perhaps natural.

As one person put it, “it is hard to avoid being a [blockchain] zealot”. This sentiment was expressed in slightly different ways by many. This is perhaps a natural, exhilarating reaction to being on the bleeding-edge of technological change. It may also be a delusion that people indulge in as they clutch to the quintessential human need for the possibility of a better future. As we travel across the world over the next year, I expect we will come to understand if it is one or the other – or perhaps a blend of both.

Next month I’ll be reporting from Lisbon, Portugal. Stay tuned to learn what I find. 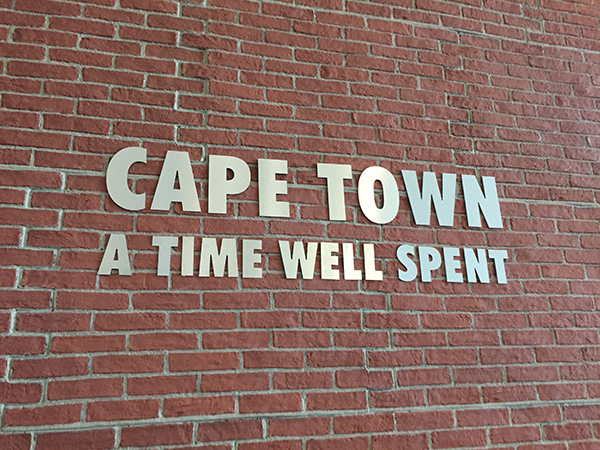