This is the final installment of Coin Center’s multi-part travel series examining how cryptocurrency is used around the world.

The final stop on the Coin Center travel series was one of the financial centers of Latin America: Mexico City. A series of initiatives to promote start-ups and entrepreneurship, taken by the past federal administration, is presently bearing fruit. Now all eyes here and throughout Latin America are on the implementation of a new Fintech Law. If implemented correctly, in a country where financial literacy and access are relatively low, the law might spur the creation and growth of companies that can provide financial services to large numbers of ‘the unbanked’. Recent moves by the Central Bank, however, suggest that a successful implantation of the law is far from guaranteed.

“Mexico has one of the world’s largest unbanked populations in the world”, Isaac Philips, the Founder of Siglo explained over lunch in the historical center. Siglo rewards users with tokens for doing surveys. These tokens can be redeemed for cell phone credit. According to the World Bank, while 93% of people in the US had a bank account in 2017, only 37% of Mexicans had a bank account that same year. As an indication of how few use the formal financial system here, Isaac pointed at how, “most people pay their utility bills in cash the local Oxxo (a common convenience store)”. Lines outside ATMs are a common site particularly on Mondays. “People don’t trust the system… they immediately withdraw cash from the ATM [on payday] then go inside to withdraw the remaining pesos in cash,” he added. There’s good reason for this distrust. “I remember 1994 when they had to knock three zeros off the peso to the US dollar exchange rate.” Experiences like have been a recurrent feature of many prior discussions we’ve had with people in other Latin American countries during this series.

How do you spend your Sunday afternoon? These people in Oaxaca spent theirs in line to pay their electricity bill. Unfortunately, this kind of line for basic financial services is common throughout Latin America. #financialinclusion pic.twitter.com/dsMeVCL65S

Though digital payments remain nascent, this may soon change. Bitso is one of the largest crypto-to-fiat exchange operating in Mexico. They also provide remittance services and a new service – Bitso Transfer – that lets people pay for goods and services with cryptocurrencies via their cell phone. Their Head of Public Policy and Regulatory Affairs, Felipe Vallejo, spoke with me in Bitso’s offices one afternoon. Their potential addressable market is large given that, in 2017, only 13% of Mexicans used the internet to pay bills or to buy something online as compared to 77% of people in the US. Given how many people pay utility bills in cash here, it is notable then that Bitso recently made an agreement with Oxxo to provide fiat-to-crypto services in all of their 17,000 stores across the country. “You can pay for your gas, electricity from Bitso,” Filipe explained. The eventual hope is to provide lower-cost payment and savings services that existing financial service providers. “The average fee for a transfer from the US to Mexico is about 7-8%…. money they take from people that work in the US and send money to Mexico…. [if we can get that to] 4% and provide more quickly, that’s a lot of money.”

Operating since 2014, Bitso has run into all of the public policy challenges that a company typically faces when operating in this new industry. The first had to do with remote onboarding, which involved meeting the regulatory requirements for determining who people are via a cell phone (e.g. providing a photo of an identification card and proof of address). This is critical because, “above certain levels for certain entities, you can’t onboard people through digital ways. You have to do it on person. That’s like huge cost to technology companies and start-ups.” They’ve also run into issues around banking license requirements, securing banking partners, whether they need to follow anti-money laundering requirements as well as managing the tax treatment of cryptocurrencies (there is no guidance to date on the latter).

The response has been to take a conservative approach in self-regulating. “The attitude of Bitso, when we started in 2014, was basically that the first employee was not a developer but a compliance officer…. My take is, from our experience in Mexico is that, you have to invest a little bit, maybe on getting ahead of the authorities and complying with something.”

The need to increase financial literacy

Low overall levels of financial literacy add to problems associated with low access to the financial system. “In Mexico, for the most part, there isn’t much in terms of financial education,”Lorena Ortiz, who is the General Manager of the Bitcoin Embassy Bar, explained. The bar opened in December 2018 and now serves as a meeting point for people in Mexico City who are interested in cryptocurrencies. “The majority of people, myself included… are totally unaware of what to do with our money. The majority of people don’t know what to do with their money, don’t know how it works and don’t know how to invest it,” she added.

Informing and educating people about cryptocurrencies turns out to be one way in which to help people better understand how and why to manage their own finances. The bar regularly hosts events, aimed at people with differing levels and types of expertise, to help onboard more people into the community in a responsible way. There’s a beginner’s course, a course for traders and various other themed events. In sum, Lorena feels that, “it is something very important about cryptos… there is nothing better for financial freedom than having control over your own money.”

Presently the issue on everyone’s lips in the cryptocurrency industry in Mexico is the so-called ‘Fintech Law’ (Ley Para Regular Las Instituciones De Tecnología Financiera). It is the brainchild of the Minister of Finance during the prior Pena Nieto administration. Providing background on how the law came to be, Felipe at Bitso explained that, “[the Minister of Finance] came back from a trip to Silicon Valley and he reached out to all the Fintech companies in Mexico. It was 10 companies with a total of like 30 employees, adding everyone up. It was a super small industry [at the time]”. The goal was to set-up a legal and regulatory environment that would enable both new and existing companies in the financial industry to take advantage of the opportunities afforded by digital technologies. “There was a lot of back and forth between the industry and the public sector. Actually, it was a really good exercise in terms of how you create a law,” Felipe added.

The end product was a law that passed last year. While there’s no dedicated cryptocurrency section in the act, article 30 lays out the definition of a new category of asset: a ‘virtual asset’ (activo virtual). The law is presently in the process of implementation. This means that the individual agencies tasked with certain aspects of the law are developing and implementing new regulations. As per Article 30, the Central Bank has the responsibility of developing a definition of a digital asset and a criteria for approving those who wish to work with these digital assets.

While I was in town the Central Bank released its guidance on virtual assets. This created quite a stir amongst some of the people who I spoke with. The Central Bank decided that the only entities that can use digital assets are financial institutions in the course of their internal activities. Coin Center has already covered the reasons for this decision. Effectively restricting the activities of exchanges with what might be considered as retail customers, the reaction on the ground was not entirely positive. “It’s [a question of being] very paternalistic on the part of the government and the Central Bank to say, ‘I can protect you for things that you can’t understand. Don’t concern yourself with these things. Don’t get involved because something bad might happen to you,’” Lorena thought.

Concerns with the eventual implementation of the Fintech Law extend beyond those in Mexico. A recurring view expressed during prior conversations with people in Peru and Colombia was that Mexico’s Fintech Law would be a template for their governments to follow. This potential consequences of this approach were not lost on people in Mexico City. Summarizing the concerns of her patrons, a large proportion of which are traders, Lorena explained that, “this [the Fintech Law] could set a pattern for the rest of Latin America. If in Mexico they put something like this in place with the institutions, with the users of crypto, what will happen in the rest of Latin America?”

Perhaps one can take solace in something that we’ve learned throughout this series. People in this industry tend to take the path of least resistance when operating in this new space. “No Mexican company would do an ICO in Mexico,” noted Isaac, who ended-up basing his company in Gibraltar. Clamping down on exchanges also has the consequence of pushing people onto decentralized marketplaces like localbitcoins.com as we learned in Colombia. Indeed the current weekly volumes of transactions in Mexico on localbitcoins.com are already on par with those of Colombia. 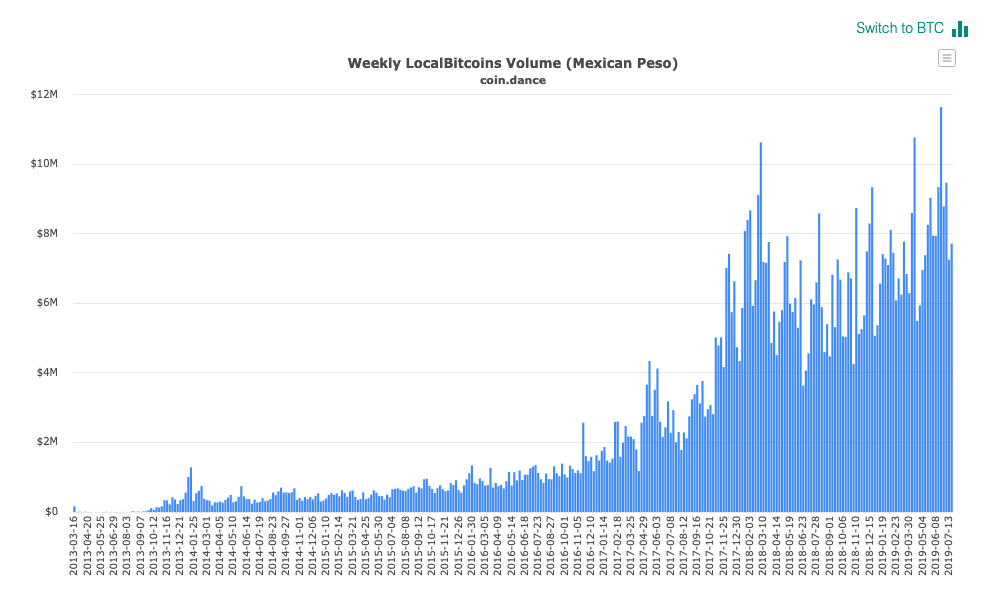 A precedent to keep an eye on

The final stop for this series provided a prime example of how, in some countries in 2019, the cryptocurrency industry stands at a legal and regulatory crossroad. With Mexico’s Fintech Law to be fully implemented by the end of 2020, early concerns of people in the cryptocurrency industry are starting to bear out. The stakes go further than Mexico’s borders as a precedent set here could end-up influencing decisions subsequently made in other capitals throughout Latin America.

Nevertheless, as we’ve learned from our experience during this series, when faced with headwinds such as these, not only do users tend to move to decentralized exchanges but companies also tend to move to more accommodating jurisdictions. Policymakers in the government agencies of Mexico, or the United States of America for that matter, have to come to grips with this reality. The cryptocurrency industry is global, the digital economy in which it could be categorized is also global, and the people who work in this space are internationally-mobile. They can and will vote with their feet.