Bulgaria sits at the crossroad of empires. Perched on the easternmost border between Europe and Asia, it is influenced by Slavic culture to the north; Mediterranean culture to the south; Eastern influence from modern-day Turkey and the European project to the West. Traces of the various rulers over past centuries can be seen everywhere – as the now unearthed Roman ruins in the capital, Sofia, bear testament.

Bulgaria’s thriving technology industry today can be traced to the legacy of another past ruler: the Soviet Union. As a part of the Comecon system, Bulgaria specialized in electronics and information technology. Evidence of a thriving cryptocurrency community can be seen all around Sofia. Indeed, the Bulgarian government might be one of the world’s largest Bitcoin “hodlers” owing to a seizure of around 200,000 BTC from criminals in May 2017. The future for the cryptocurrency community here appears bright though various challenges will have to be overcome.

“Lots of obstacles have fallen here… in order to do business 20 years ago you needed a lot of capital, skilled professionals, money. Now people can do a 6-month digital course and start making a decent living in the tech industry”. Temelko Dechev, a business and investment advisor, explained to me why so many technology multinationals have opened operations in Bulgaria. The first draw is a large and highly-skilled technical community. Bulgaria also has some of the fastest internet speeds in Europe. Taxes are low – as are the wages for technical talent – and other barriers to business creation have also fallen. European Union membership facilitates cross-border trade and macroeconomic stability. “We experienced hyperinflation in the late 90s in Bulgaria. Since then we’ve seen tremendous growth due to EU policies and better government and fiscal policies”, Temelko told me. This potent combination has made Bulgaria a prime location for the organic growth of the cryptocurrency community.

Walking around Sofia one stumbles upon cryptocurrency artifacts with surprising frequency. Skaptobara, a burger joint, has a Satoshi burger that can be purchased with Bitcoin. At MELHIŠKA [МЕЛХИШКА] the owner happily accepted Bitcoin for our meat plate and beer. Philip, who owns ‘Beera’, a craft beer shop, and accepts Bitcoin payments, sat-down with me to explain why he and so many places accepted cryptocurrency payments. “I started accepting Bitcoin because the crypto community hang out around The White Café close-by”, he explained. “There’s a lot of very bright, technical people in Sofia”, he emphasized.

Scars also remain from past cryptocurrency projects gone awry. The now vacant offices of OneCoin, a pyramid scheme that enticed people to “Join the Financial Revolutions”, before collapsing in 2015, can still be found complete with fit-out windows in the city center. 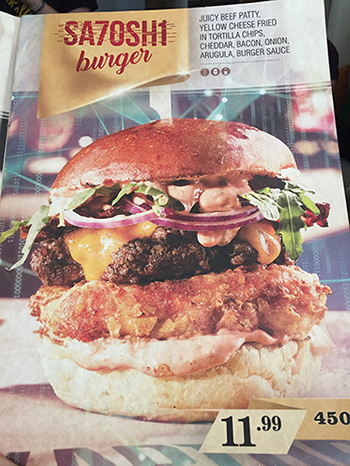 For a community that is as global as the cryptocurrency, the legacy financial architecture and legal/regulatory scheme still poses substantial obstacles to their interaction with one another. During the month I was in town many merchants had problems accepting cryptocurrency payments. The reason was that the banks had begun freezing their accounts. “In Bulgaria it’s impossible to have a company bank account and anything to do with cryptocurrencies… if you do they [the banks] freeze your account”, Liliya ‘Lilly’ Zhekova, who runs legal compliance for Midas Capital, explained to me. This message was repeated many times over the month. “They [the bank employees] give you a friendly call if they see any transaction from your account to something crypto-related… then they freeze the account.”, another person told me.

While it might be tempting to place all the blame on the banks for the current state of affairs, Cyril Tabet, who is co-founder of Kizo which is a blockchain ecosystem for social impact, explained to me that, “it [the account freezing] has more to do with the payment intermediaries that process international transactions”. The intermediaries are wary of any transactions that might be associated with illegal activities, which has led them to impose a blanket ban on any cryptocurrency-related transactions.

Faced with this situation, some of the merchants I spoke with were looking for regulatory-compliant services abroad. “I’m migrating over to Coinbase and it’s taking some time due to regulatory approval and for them to send me a terminal from overseas”, Philip from Beera told me. Once he has everything set-up, he looks forward to accepting all cryptocurrencies supported by Coinbase. “Though I’ve accepted the Microsoft of crypto”, he concluded with a sigh.

A center of gravity, and Starfleet, for the Sofia cryptocurrency community

Aeternity, has supported a group of early-stage businesses that they hope will provide the first use cases for their technology. Named the ‘Starfleet’, this cohort of 14 companies, with founders and employees from around the world, moved to Bulgaria to take part in the incubator program. In a stroke of luck the first Starfleet cohort graduated during the month that I was in town, which meant that I was able to meet with a number of them.

Georgi Ivanov is the CEO of NOBLE, which received some funding following the Starfleet incubator. He is hoping to change the way in which companies recruit top talent. “We think that if people tap into their own networks with rewards for referrals [bounties] using a blockchain, we might have a faster and cheaper process with better people found.” Having come from a more traditional corporate background, Georgi attributed Bulgaria’s rapidly growing blockchain ecosystem to, “lots of existing technical talent that could be quickly converted to blockchain.” A Sophia native, he was “surprised at the monthly crypto meet-ups, which get over one hundred people… really smart people.”

Yulian and Ilya are members of another Starfleet company that received some funding following demo-say: Trade X Social. Their as of yet unreleased application hopes to let people, “mine cryptocurrency on any smart device” then share trading strategies with other users of the app. At dinner one evening we talked about their experience as part of the Starfleet. “The incubator advisors filled-in all the gaps we see in the ecosystem… people in this community share their information… it’s been very helpful”.

The ICO wave comes to Sofia

The past year has seen a rush of initial coin offerings (or coin/token/asset generating events, depending on the jurisdiction and nature of the offering) in Sofia. Many of the companies that are raising or have raised money through ICOs hope to use blockchain to disintermediate existing industries. One example is Evedo, which is led by Stoyan Angelov, whose name comes up quickly in Sofia when discussing cryptocurrencies.Having built a number of successful companies in the event industry, then helped found and build Lockchain/Locktrip (a kind of Airbnb using blockchain), he has assembled an international team for Evedo. Their goal is to, “reduce the overhead, transaction costs and accounts receivables for many parties we have to work with in the entertainment ecosystem.” 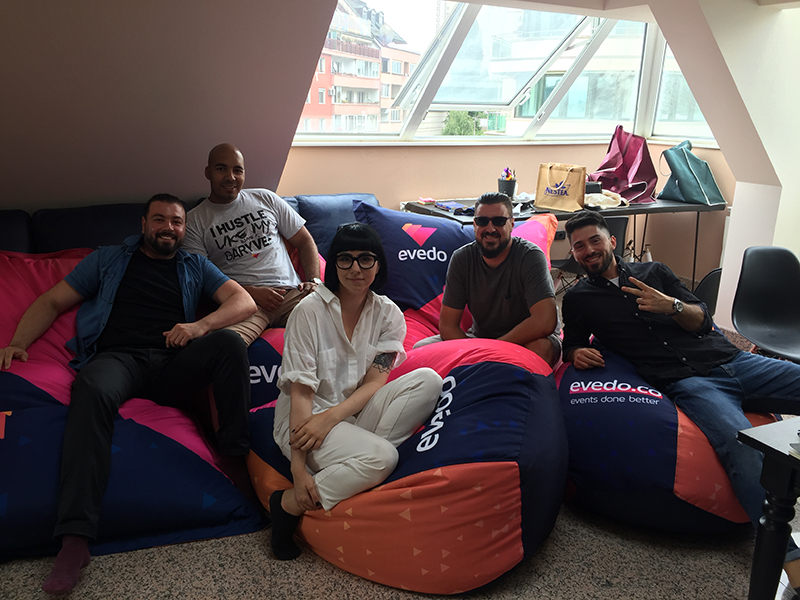 A similar concept was on-display during a presentation at the monthly Sofia cryptocurrency meet-up. One of the founders of Unitalent explained how he hopes to reduce the search and transaction costs associated with the freelancer market. Again, in situations where there are many transactions and low or non-existent trust between counter-parties, it is thought that a blockchain-based application might deliver some benefits.

Tempering the optimism that naturally accompanies start-ups and fund-raising, some in the community are concerned that ICO money is not coupled with the business and strategic advice that would help bring the technical creations to market. “A lot of people jumped into this space after the money but didn’t have the business acumen behind them… basically just throwing capital at a dream”, Temelko told me. Fears about the overall cryptocurrency market were also expressed. “Investors took the returns from their Bitcoin investments and reinvested them in Ethereum. They then redirected the Ethereum to ICOs, which were then converted into fiat to pay for services. Now we see a market drained by the ICOs”, Lilly explained. It remains to be seen whether these concerns and fears are well-founded though their presence suggests a level of maturity in the community that has not been seen in all the cities visited throughout this series.

“Welcome to the middle of nowhere”, Niko and Dani said as we arrived at an until recently abandoned ex-Soviet facility on the outskirts of town. Amidst vast fields of sunflowers, this site, which is adjacent to one of the region’s most important electricity sub-stations, will purportedly host cryptocurrency mining. “The good thing here is, the old buildings which previously housed heavy machinery… they’re built to last forever”, Niko pointed out. At the time of my visit only the ventilation fans and racks for cables had been installed. However, in the subsequent weeks I received photos of the newly installed mining rigs.

Bulgaria is now home to what I was told is a thriving cryptocurrency mining industry. “Cryptocurrency mines are popping up all over the place because of the cheap power”, a driver told me one day. It’s not just the cheap power though. “Most think it’s only the electricity that matters with crypto mining, but you also need to have the technical knowledge to actually know what you’re doing”, Dani explained. Running me through the advantages from over- or under-clocking and the optimal distances of mining rigs from one another, it didn’t surprise me to hear that miners from overseas are now outsourcing their operations to more efficient, Bulgarian miners as market prices of many cryptocurrencies have contracted. 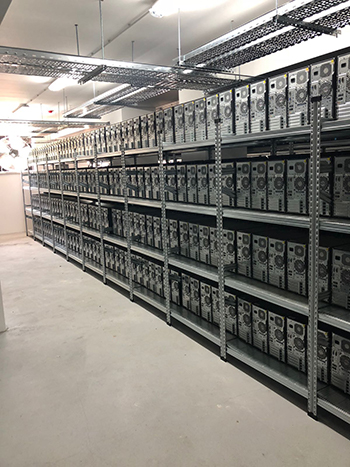 With technical talent, funding, a diaspora with experienced advisors and mentors, cheap electricity and access to a stable legal and regulatory system at home and regionally, the cryptocurrency community in Bulgaria has all it needs to make the most of the opportunities afforded by this wave of technological change. Forever at the crossroads of empires, perhaps the next decade will see people in Bulgaria strike out on their own path as they provide a unique contribution to a global, digital community that still has much left to be done if it is to reach its full potential.