Local interest is slowed by confusion coming from vague and conflicting government guidance.

The cryptocurrency concept should resonate with Spaniards – many of the economic concepts that underpin Bitcoin originate in the Iberian Peninsula. In the 15th century a group of scholars, the School of Salamanca, came up with theories around value and prices, subjective value determination, the role of scarcity in value determination, inflation, and a quantity theory of money. These ideas were later rediscovered by economists of the Austrian School, such as Hayek, which then inspired Satoshi.

Yet today the cryptocurrency community remains small but tightly bound in Spain. A niche group of enthusiasts gather to discuss the implications of this new technology. In spite of being easy to purchase and a number of grass-root organizations being present, overall awareness and adoption remains low. This might be due to a combination of general disinterest in the wild promises of this new technology; difficulties in actually using the technology; and a confusing thicket of contradictory directives from Madrid and Brussels.

Purchasing Bitcoin was relatively easy in Valencia, where I spent much of the month. One only has to buy a denomination of a Bitnovo card from FNAC, a kind of Best Buy with books, and fill-out an online form. A few hours later the Bitnovo team sends the Bitcoin to one’s wallet. I was told the service is so convenient that, upon restrictions being imposed on crypto exchanges at home, Koreans were flying to Valencia to buy the cards. 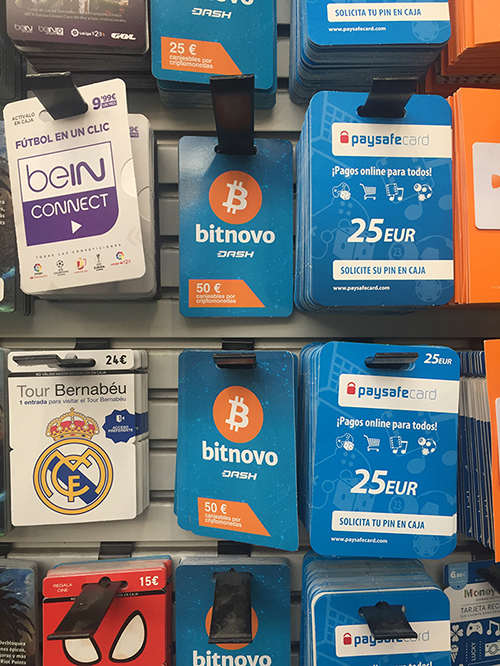 While possible to purchase Bitcoin easily, I did not personally see a lot of local technical development happening in the cryptocurrency space. At one event I attended in Barcelona, of the four projects presented, only one of them had a Spanish team [two founders, incidentally, were Argentinian].

This was not lost on the people with whom I spoke. “Most of my clients are foreigners… they come from places like Germany [bitcoin ATMs were recently banned there], Russia, the UK, France and strangely, Pakistan,” Feran told me. He runs Group BTC in Barcelona (where I also visited briefly). I went to his store to use his Bitcoin ATM, which worked quickly though required my deposit in Euros. We ended up spending a few hours talking during which he used the word ‘atrasado’ (behind) many times to describe the Spanish relationship with digital technology.In one of my recurrent habits, I ended-up speaking with one of my cab drivers about Bitcoin later that week. He was familiar with it and thought that, “interest really exploded here over the past year”. A stock trader at times, he keeps out of cryptocurrencies because, “it is so volatile that it could go to zero tomorrow”. He also prefers to have something tangible, something that cryptocurrencies certainly are not, and feels that it’s all too technical for him to understand what is really going on. 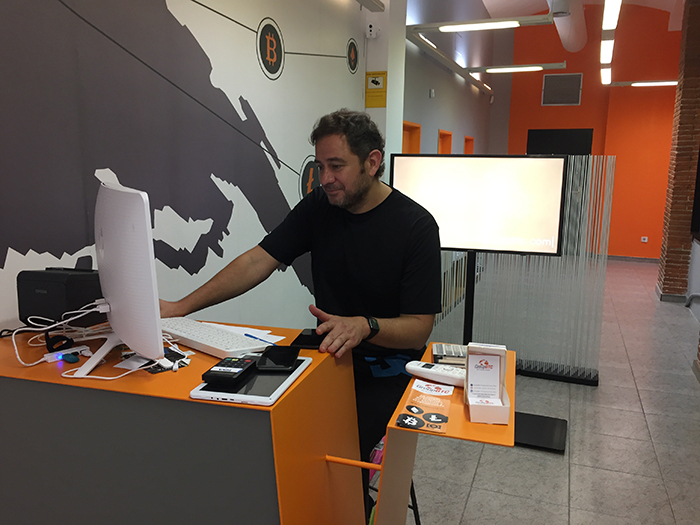 Confusion from experts to amateurs

One evening a group of around thirty people of all ages and backgrounds came together in a Valencian dive bar to discuss the implications of changes to Spanish tax laws on cryptocurrencies. The event was organized by Bitcobie, which provides training and information on cryptocurrencies in Spanish.

Interest in this area has been sparked by a recent government document that clarifies how taxes could be applied to Bitcoin mining and trading. The wording of the document leaves a lot of room for different interpretations, which led to a deep discussion amongst well-informed but ultimately still confused participants. “What would be the tax rate on a hard fork…”, “…how about an airdrop?”, “Are tokens taxed the same as coins?”. On-and-on went the two-hour long discussion of arcane crypto and legal topics. To add to the confusion, the Spanish decision is not entirely in line with the relevant European Union Directive. For a community that treasures decentralization so much, an awful lot of fretting occurs over what orders come from Madrid or, for that matter, Brussels.

A niche community of cryptocurrency fans in Valencia is organized by Ramon Quesada. He was one of the founding members of Avalbit, the ‘Asociación del Bitcoin y otras Tecnologías’ (Association of Bitcoin and other Technologies). For people like Ramon there is a deeply ideological element to cryptocurrencies. Ramon is originally from Cuba so he understands the utility of censorship resistance, which is one characteristic that many cryptocurrencies possess. “If you were part of the opposition back home you were immediately shut out”, he said. “What’s important [with cryptocurrencies] is that people can use it when they want and it resists centralization”. 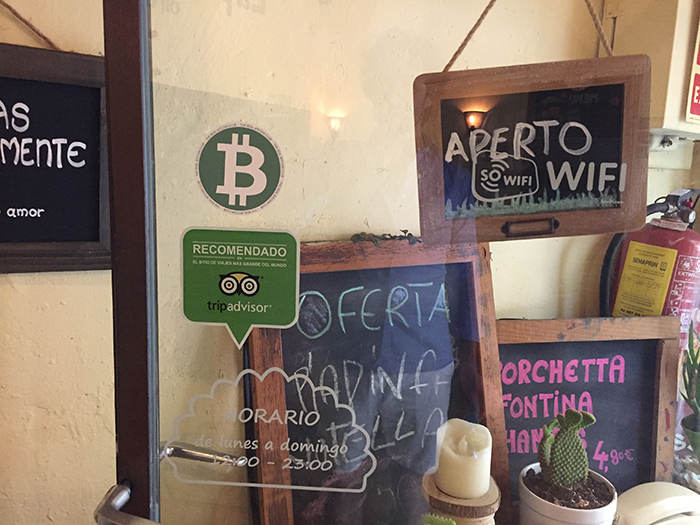 The Bitcoin Cash Fund is working hard to spur Bitcoin Cash adoption in Spain. For instance, the Fund sponsors meetups in Barcelona. When visiting Barcelona I actually found myself purchasing a piadina (a kind of Italian quesadilla) with Bitcoin Cash – and it worked. The store accepted Bitcoin Cash because of ‘The Real Bitcoin Club’, which throws periodic parties and tries to get local merchants in ‘Bitcoin Barrio’ to accept their preferred means of payment.

One Saturday afternoon Ramon invited me to dine and speak with an eclectic group of Bitcoin Cash enthusiasts in Valencia. Many traveled several hours to attend. They came from all walks of life including developers, philosophers, authors, entrepreneurs and beyond. When introducing ourselves one person explained glibly that he was there, “because I don’t like the banks”. Small vouchers for Bitcoin Cash were handed around. Debates occurred over the optimal block size, the equities associated with inflation and the need for a more sustainable economic development model, among other topics.

These discussions were subversive in a way – the common thread was a dissatisfaction with the institutional status quo. Discussions like this are somewhat taboo at present, under the European Union, as the reaction to the proposal for a parallel currency in Italy demonstrates.

The month concluded with a meetup at which the team from iTiny presented. They are using the ERC271 standard to develop mobile homes that are linked to tokens on a blockchain and connected to their own renewable energy grid. It is an ambitious idea. We were treated to an hour-long projection into a future world where environmentally-friendly, self-contained and self-sufficient houses could be moved or rented at a click.

After an hour of interrogation from a deeply engaged and sometimes skeptical audience, the event concluded and I departed. Walking home I passed ‘Ciutat de les Arts i les Ciències’ (the City of Arts and Science), which is a neo-futuristic complex that symbolizes the utopian grandeur that technology holds to create a better future. It is quintessentially modernist: isolated in spite of being in the center of the city, awkward to traverse yet awe-inspiring in its grandiose dimensions. 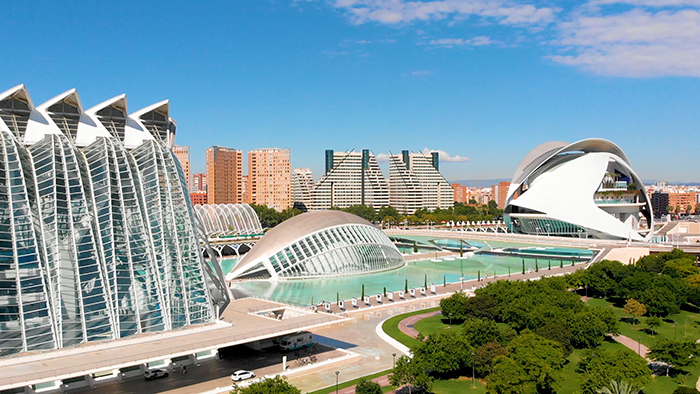 The parallels with cryptocurrencies became clear to me at this point. Similar modernist visions of an idealized yet difficult to achieve future state have been expressed a number of times during our encounters with cryptocurrency communities around the world. Yet actually arriving at this utopian end-state tends to be impeded by clunkiness, bugginess and human tendencies like aversion to change. The cryptocurrency community in Spain is small – so they bond closely to one another – perhaps because their compatriots do not yet share their enthusiasm for this world of tomorrow. It does not help that cryptocurrencies remain, for the most part, so hard to use, confusing and expensive for the everyday person.

Further on I returned to the residential neighborhoods. Children were out playing in the streets, parents eating tapas at sidewalk cafes and idlers strolling in the deep summer heat – just as people have been doing for hundreds of years here. Convincing these people to adopt and use cryptocurrencies is a hard task but one that will have to be done if the cryptocurrency community’s vision of tomorrow is to be made a reality.