(This is a joke. Please do not take it seriously.)

For several years now, Coin Center has been at the forefront of analyzing how the novel decentralized properties of cryptocurrency networks match up to securities regulation. Recently, however, every single cryptocurrency enthusiast has become a vocal expert in securities law nearly overnight. It is a humbling show of interest in the public policy process from an august academic community. Though we may never match the legal prowess of the scholars who have studied dozens of tweets on the subject, our researchers have been tirelessly poring over relevant case law and academic journals to better understand the legal questions at play.

While examining microfiche photographs from the era, Coin Center has discovered that the courtroom in which the landmark 1946 Supreme Court case SEC v. Howey Co. was decided flew a flag with a gold fringe. As all real legal experts know, a gold-fringed flag is not a real Flag of the United States of America, even though it may appear to be one to the unsophisticated eye. A gold fringe indicates the Court was in fact an admiralty court operating under martial law rather than, as previously thought, one operating under the United States Constitution.

Remember that Executive Order 10,834, which admitted Hawaii into the union and was signed on August 21, 1959, by President Dwight David Eisenhower, states: “A military flag is a flag that resembles the regular flag of the United States, except that it has a yellow fringe border on three sides.” 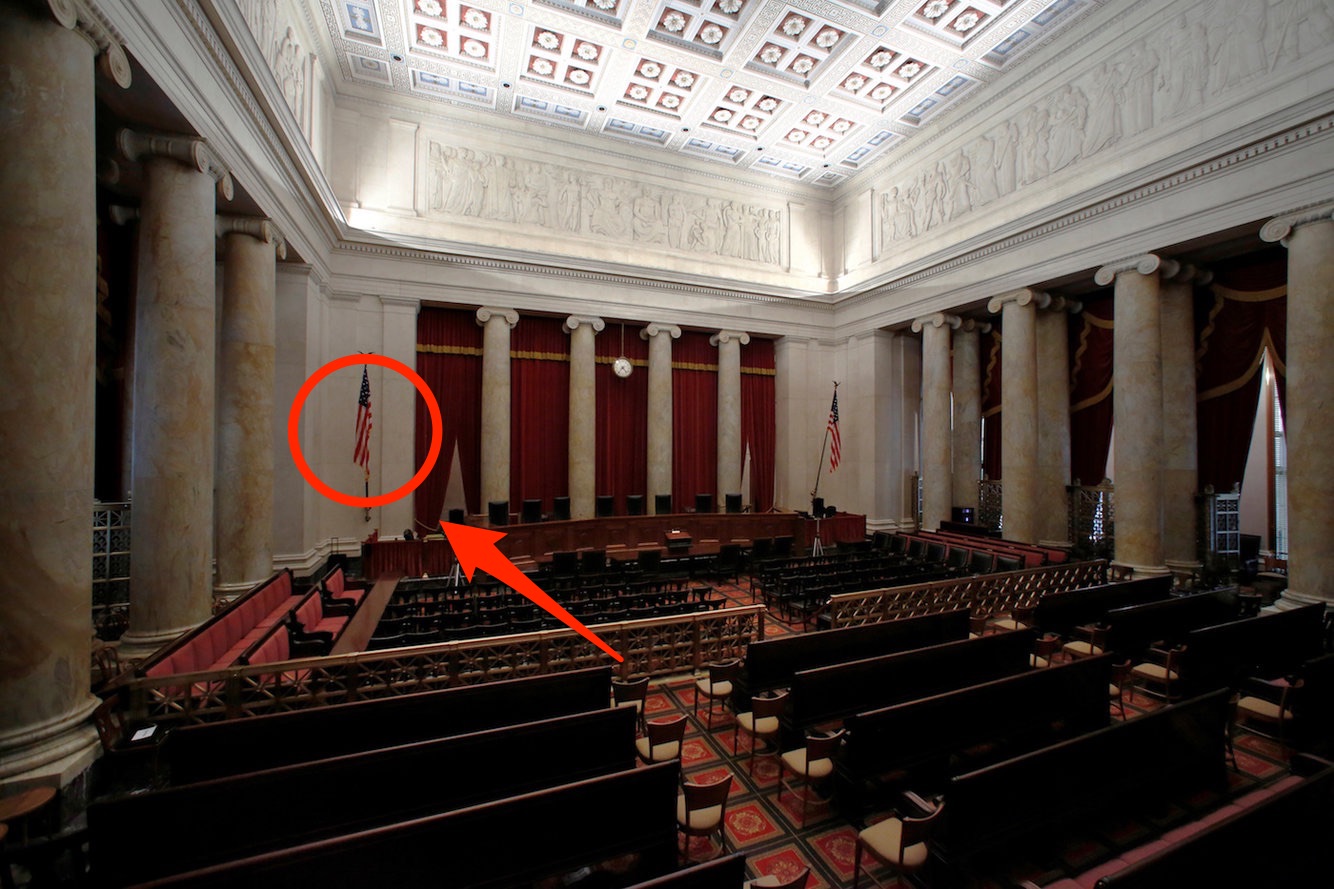 The internationally recognized Law of the Flag dictates that a “vessel,” in this case the courtroom, is subject to the jurisdiction and laws denoted by the flag it flies. You can see this principle at work when you enter a foreign embassy.

Our founders rejected the idea of admiralty law as the rule of the land in this great nation, as they laid out in the 1774 Declaration and Resolves on Colonial rights of the First Continental Congress (emphasis ours):

[T]he following acts of parliament are infringements and violations of the rights of the colonists; and that the repeal of them is essentially necessary, in order to restore harmony between Great Britain and the American colonies, viz.

The several acts of 4 Geo. 3, ch. 15, and ch. 34. — 5 Geo. 3, ch. 25. — 6 Geo. 3, ch. 52. — 7 Geo. 3, ch. 41, and ch. 46. — 8 Geo. 3, ch. 22, which impose duties for the purpose of raising a revenue in America, extend the power of the admiralty courts beyond their ancient limits, deprive the American subject of trial by jury, authorize the judges certificate to indemnify the prosecutor from damages, that he might otherwise be liable to, requiring oppressive security from a claimant of ships and goods seized, before he shall be allowed to defend his property, and are subversive of American rights.

In this union–in these United States of America–we do not live under martial law. Though perhaps laws made within the confines of a courtroom flying an admiralty flag may apply in the building (the “vessel”) in which they are decreed, they are invalid the moment one crosses the threshold back into our free and democratic society. As such, any rulings made in the Supreme Court during 1946 apply only inside the actual Supreme Court and on US Navy vessels asea in international waters. Our researchers are doing additional digging to determine whether any ICOs were conducted under such conditions.

This revelation has serious implications: To start, it nullifies the decision in SEC v. Howey Co. (and, therefore, the eponymous test for whether something is an investment contract subject to the SEC’s jurisdiction). More troubling still, it means that the thousands of productive hours spent respectfully debating the nuanced points of this topic among cryptocurrency enthusiasts have been for naught. Unfortunately, it seems our community’s focus may have to return to evaluating cryptocurrencies on their relative technical merits and product-market fit, rather than on how well they do or do not fit within the parameters of an invalidated test.

We recognize the turmoil this discovery will cause in the world, but we must not allow convenience to cloud the execution of our founding fathers’ vision. To that end, we call on the Marshall of the Supreme Court to publicly announce the dissolution of the Howey regime, and look forward to working with the nation’s policymakers to build a new, constitutional framework for the regulation of securities offerings.