Is Bitcoin’s Price Volatility a Problem for the Technology?

As the rise of bitcoin in mainstream consciousness has expanded, much attention has been given to its price volatility vis-à-vis government-issued (fiat) currencies. Skeptics have opined that this volatility will preclude bitcoin from ever replacing traditional fiat currencies given the fluctuating purchasing power inherent in the volatility, while regulators worry that this volatility poses a systemic risk to investors and users and should thus be given enhanced scrutiny. We believe bitcoin’s price volatility is a product of the vast range of eventual possibilities while also serving as an opportunity for currency traders. Ultimately, we expect increased trading to lead to somewhat reduced fluctuations as the velocity of transactions leads to increased liquidity.

We believe investors value bitcoin based on a weighted average of potential outcomes that can range between $0/bitcoin to $1,000,000/bitcoin. Given the nascent state of bitcoin, the significance of this financial instrument is a relative unknown with outcomes spanning the gamut between irrelevance and revolutionary. The negative outcome would be if bitcoin was to be overtaken at any point by a superior alternative cryptocurrency or somehow succumb to an unforeseen vulnerability thus resulting in a price of zero and a small footnote in the annals of economic history. The positive outcome would represent a scenario in which bitcoin became the global working capital of trade leading to a per bitcoin price of immense value.

This broad set of outcomes means any small change in perception regarding the likelihood of the best case outcome drives significant changes to current valuation. Said otherwise, if market perception of the likelihood of the best case outcome changes by 0.01%, that could drive a $100 change in current valuation, or >20% in today’s prices. This is different than most other financial instruments that have a far narrower range of outcomes which in turn create more stable values.

Assigning an expected value for bitcoin is considerably harder than valuing a publicly traded payment network such as Visa. We can say within two standard deviations that Visa’s stock price will be within $300 and $1,000 in 10 years. This is a fairly narrow range and represents the difference between Visa growing earnings at 5% and Visa growing at 20% a year for the next decade. With bitcoin, however, we can make no such assurances given the forces that will ultimately decide its fate. For example, unforeseen government intervention, lack of consumer adoption, or flaw in the technology could all result in bitcoin’s demise. Conversely, large scale consumer adoption, yet-to-be-developed applications built on the back on the technology that expand the use of bitcoin beyond currency/payments, and accommodating government policy globally could take the bitcoin price to heights of great magnitude.

Range of Outcomes Comparison between Bitcoin and Visa: 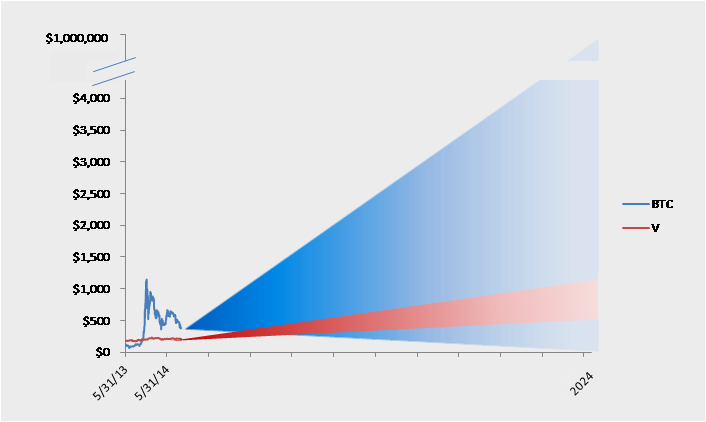 This would imply volatility in the price of bitcoin may not go away anytime soon, as the potential for bitcoin is being constantly measured by the market in light of rapid technology development and unpredictable regulatory constraints.

However, we do not believe this volatility, in itself, will impede the growth of bitcoin technology and ecosystem. As an example, the number of merchants signing on to accept bitcoin payments for goods and services is expanding at a rapid pace. Volatility in the price of bitcoin should not impede retailer acceptance of bitcoin, in our opinion, as merchants and payment processors are entirely shielded, and we expect consumers will be shielded in the future through new applications currently under development. Since retailers have the choice of receiving the same dollar amount as the items are listed for into their bank account, and payment processors have the ability to hedge real-time, both are already free from volatility risk. Rather than worry about volatility, merchants are able to benefit from the low cost aspects of the bitcoin network. While a similar service does not currently exist for consumers, wallet providers are currently developing applications that will allow consumers to utilize the bitcoin network with minimal exposure to bitcoin price volatility.  We expect wallet providers such as Coinbase and Circle to work on solutions that will allow consumers (as opposed to investors/traders) to hold only a limited amount of bitcoin in their wallet and still be able to benefit from the simplicity of using bitcoin and the incentives retailers will share with them as they reduce the cost of payment acceptance from 3% to <1%. Just as consumers carry a certain amount of cash in their physical wallets in spite of commonly using payment cards, consumers may hold a certain amount of bitcoin in a digital wallet for online transactions, and have that balance replenished by the wallet provider out of their bank account. Once these services come online we expect the volatility concern from the standpoint of consumers to be addressed.

From a trading standpoint, we believe traders value volatility as they continue to gravitate to bitcoin trading as an active 24/7 market uncorrelated with other asset class returns. The connection between volatility and trading volumes is well established in equities and is beginning to emerge in bitcoin trading. Our conversations with bitcoin traders (and Wall Street traders trading bitcoin) lead us to believe they see opportunity in a market that is characterized by frequent disruptive news flow and large movements that reflect that news flow. We believe that as exchanges become more robust, secure and transparent, liquidity begets liquidity, and this trading activity will continue to draw more traders. We expect this activity to continue to draw more sophisticated tools borrowed from the equities trading world – such as derivatives, margin trading and computer trading – all of which have contributed volatility in the equities markets. 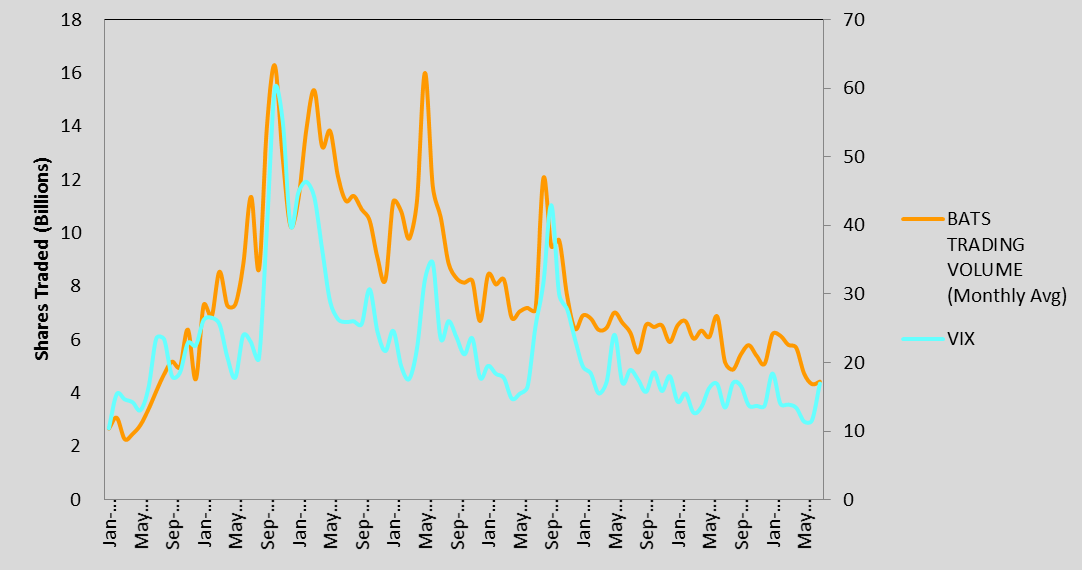 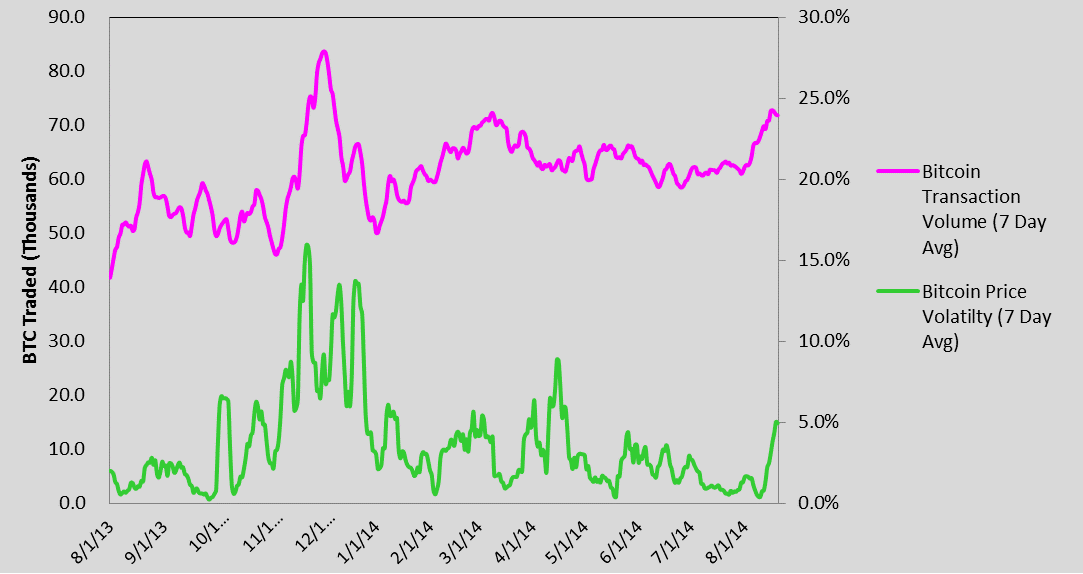 Since economic activity (sale of goods & services, money remittance, P2P) is intermingled with trading activity, we believe the trading activity is helping create the network capacity and monetary base to support the future economic applications of bitcoin. As “first wave” bitcoin applications such as remittance, online payments and micropayments mature, we expect them to make up an increasingly large proportion of overall transaction volumes. In the meantime, given the fact that “miners” (network operators) are compensated in newly issued bitcoins, investment and trading have “paid” for the hundreds of millions of network equipment (i.e. mining equipment) and iterative refinements of the bitcoin code.  This aspect of bitcoin is the very reason transactions fees are essentially zero; the network is not compensated by transaction fees, but rather through newly created bitcoins. This gives bitcoin volatility inherent value for without it the network may not have its current capacity.

In our opinion, it is evident that bitcoin volatility does not detract from the overall viability of bitcoin and instead is a source of value. Volatility exists due to the wide range of potential outcomes for bitcoin and investors’ shifting perceptions of which outcome will prevail. This active trading and investment in bitcoin has the added benefit of supporting the network operators through higher-priced newly-created bitcoins. Eventually, as active trading in this 24/7 market rises, the velocity of bitcoin will provide the necessary liquidity to support other applications of the bitcoin network such as payments, remittances, micro payments. Third-party services supporting merchants and consumers will leverage this liquidity to provide payment services at far less cost than the current financial infrastructure.

Given these factors, the message for policymakers is clear: volatility should not be seen as an inherent flaw in bitcoin and does not necessitate any additional regulation.

Gil Luria is Managing Director at Wedbush Securities; Aaron Turner, who co-authored this backgrounder, is a Senior Associate at Wedbush.