Imagine if every computer had to store every e-mail, to receive any. That’s how blockchains work. Lightning Network allows computers to make blockchain transactions, only storing the data they care about—their own money.

Lightning Network is a protocol for scaling and speeding up blockchains. It was designed to solve some of the technical limitations of the Bitcoin blockchain, but could be implemented on top of any blockchain.

Scalability was the first major motivator for Lightning, as Bitcoin’s distributed nature greatly limits the transaction rate of the network. While Visa can process tens of thousands of transactions per second, Bitcoin’s network is limited to less than 10 per second. Another motivator for Lightning’s development is that the Bitcoin blockchain’s “block confirmation time” is approximately 10 minutes long. That means it takes 10 minutes for a bitcoin transaction to confirm. Further, transaction fees on the Bitcoin blockchain can run between 5 and 10 cents per transaction, rendering micropayments infeasible. Lightning Network, by contrast, can enable near-instant transactions, at a rate of thousands to millions per second, with fees of a fraction of a cent (or even free).

Lightning Network is based on a technology called payment channels. A two-party payment channel is created when both parties create a 2-out-of-2 multi signature transaction on the blockchain, with at least one party committing funds to the 2-of-2 ledger entry. Each person has one private key, and transactions spending from the ledger entry can now be made only if both keys sign. This initial transaction to open a channel takes 10 minutes (or whatever the normal block time is), but afterward the participants can transact with each other instantly using the funds allocated in the the channel. These instantaneous transactions are made by passing signed transactions back and forth, spending from the 2-of-2 ledger entry.

To use Lightning, two participants, Alice and Bob, create an initial transaction on the blockchain for $20, where each party has $10 of the value.

This initial allocation can then be updated, such that Alice then has $5 of the total $20 value, and Bob has $15, and so on. When the participants have finished transacting with each other, the most recently exchanged transaction signature is broadcast to the network, finalizing the movement of the funds in the channel—some to one party and (if any remain) some back to the other.

Lightning takes the technology behind payment channels and creates a network of these channels, using “smart contracts” to ensure that the network can function in a decentralized capacity without counterparty risk. As an example, Alice may open a channel with Bob, who in turn has a channel with Carol, who has one open with Dave. If Alice wants to transact with Dave, she can send funds via Bob and Carol, and Dave will ultimately receive them. But, because of multi signature and smart contracts inherent in the design of Lightning, Alice doesn’t need to trust Bob and Carol as an intermediaries—the protocol uses cryptography to ensure that the funds will either reach Dave through Bob and Carol or else be automatically refunded to Alice. 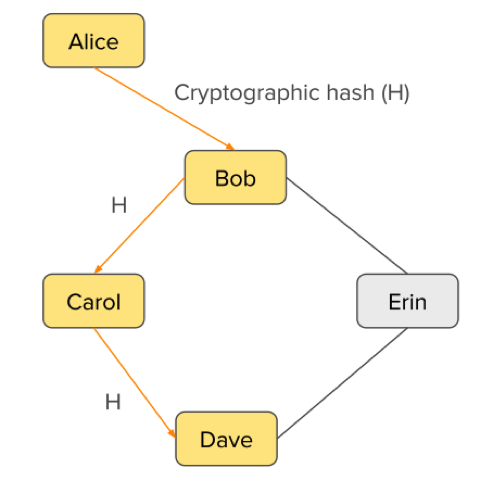 Bob and Carol function as “nodes” on the network. Nodes on the Lightning Network are in some ways analogous to miners on the Bitcoin network. They function as the servers that process the transactions on the network in a decentralized manner. Like miners, they do not have control over the funds they help move. Bob cannot steal Alice’s funds, as he will only receive the sender’s incoming payment if he has already sent the outgoing payment to the recipient. Thus, receiving a payment is dependent on having already forwarded it. Lightning payments are conditional upon disclosure of a cryptographic secret, and knowledge of that secret allows for redemption from prior nodes (when Dave redeems from Carol, Carol can now redeem from Bob).

What happens, though, if Bob goes offline? Do the funds stay forever in a 2-of-2 payment channel? To deal with unreliable nodes, Lightning has built-in smart contract mechanisms such that users can unilaterally close their channels. It uses a “hashed timelock contract” to ensure that if Bob disappears, Alice can always get her money back. There is a time value set on this contract, typically in hours or days, so that Alice can get repaid even if Bob’s server is down.

Similarly, what happens if Alice sends funds from her multi signature address to Dave on the Lightning Network but then tries to renege? She could do this by broadcasting an older transaction to the blockchain, thereby attempting to close out the channel in the state it was before she sent a transaction to Dave. While Lightning software will delete these old transaction states, Alice could have changed the software to save it. If Alice tries to claim she still has her old balance, Dave’s software (or other designated servers) will monitor the blockchain for such a transaction, and when it catches Alice’s broadcasted transaction, she will lose all of her funds to Dave as a penalty. As a result, there is a disincentive for anyone to try to broadcast an old, invalid state.

What if Alice and Bob are both online and willing to close their channel? If both parties cooperatively close a payment channel, the funds can be cleared to the blockchain in 10 minutes, the amount of time that it takes for a bitcoin transaction to confirm. Alice and Bob may have transacted thousands of times on Lightning Network in the interim.

Lightning Network ultimately relies on the underlying blockchain, be it Bitcoin’s or otherwise, for its security. In the case of Bitcoin, it uses the underlying proof-of-work algorithm that secures the entire network to secure it as well. The blockchain is the ultimate arbiter, or in effect an automated judge. With Lightning, you always know how the judge will decide, because it is pre-written into the transactions used to create the payment channels that make up the Lightning Network. This is a judge that cannot be cajoled or bribed. In effect, Lightning allows for a “local consensus” state which is ultimately enforced by the “global consensus” (the blockchain). This local consensus state does not have custodial trust similar to traditional models, as any participant can unilaterally close out and redeem their funds without the cooperation other participants. Ultimately, Lightning uses the underlying blockchain as a means to batch settle transactions that have occurred off-chain without counterparty trust.

Lightning Network can work on the Bitcoin blockchain, on other blockchains, or it can be used to instantly transfer different assets between blockchains using “cross-chain atomic swaps.” The consensus rules for each blockchain can be different, allowing for secure crossing of asset classes without custodial clearing agencies.

With Lightning, small transactions or payments can flow through the network similar to how packets flow through the Internet. It has the potential to create new use cases that were not previously possible, such as machine-to-machine payments, content micropayments, and instant asset swaps.

Thanks to Tadge Dryja and Joseph Poon for their comments and feedback.