And not just crypto. Provision in the America COMPETES Act would allow Treasury to secretly prohibit any kind of transaction it deems a “concern” without any public notice or input.

Another must-pass bill, another rushed policy that severely damages the privacy and constitutional rights of cryptocurrency users.

We’ve just seen language in the America COMPETES Act of 2022 (see page 1482)—a bill ostensibly about economic competitiveness with China—that would strip all administrative procedures and safeguards from the imposition of so-called “special measures” prohibitions in the Bank Secrecy Act while simultaneously expanding authority for such prohibitions to cryptocurrency activities. In brief, it would hand the Treasury Secretary unchecked discretion to forbid financial institutions (including cryptocurrency exchanges) from offering their customers access to cryptocurrency networks. The Secretary may not use this discretion immediately, but it is not power the Department should have.

Allow us to unpack all this and explain why this bill, if it includes the new language, would help the US compete with China not on economic growth and innovation, but on denying citizens due process and human rights.

What are the “special measures” in the BSA?

For example, if the Secretary of the Treasury deems that either (a) the Netherlands, (b) a Dutch crypto exchange, (c) all cryptocurrency transactions validated by a miner outside of the US, or (d) all non-custodial wallets are “of primary money laundering concern,” then she can swiftly make it illegal for any US financial institution (regulated cryptocurrency exchanges included) from maintaining accounts for customers involving those “concerns.” The law already lacks robust due process (for effected customers, especially, there’s no clear way to challenge these designations in the Bank Secrecy Act), but at least in its current form it requires a public notice and an opportunity for public comment in advance of the measure taking effect (in the case of special measure five prohibitions), or within 120 days (in the case of the heightened surveillance measures under measures 1-4). And none of the special measures can become permanent, under the current law, without a public process. This means the public will, at the very least, be alerted to the imposition of these draconian controls and have some opportunity to comment about their merit or constitutional deficiencies.

The proposed language in the America COMPETES Act would, and we cannot stress this enough, remove all formal controls, time limits, and public notice requirements from the imposition of these draconian measures. It eliminates the notice and comment process (both in advance of prohibitions and after surveillance impositions) and it allows the Secretary to impose these measures “by order, regulation, or otherwise as permitted by law” permanently and secretly with no obligation to engage in a public process.

Aside from removing the already limited notice and comment safeguards, the law also ostensibly empowers the Treasury Department to impose these measures with regard to cryptocurrency transactions. We want to be very clear up front. The special measures as they presently exist can already be interpreted as applying to cryptocurrency accounts at financial institutions. There is absolutely no need to increase the scope of the treasury’s authority here. Like the unnecessary redefinition of “broker” in the infrastructure bill last summer, the parts of this language aimed at cryptocurrencies are entirely unnecessary while the removal of procedures and the creation of unlimited administrative discretion is deeply consequential. In other words it is an attempt (deliberate or not) to use the moral panic surrounding criminal usage of cryptocurrencies (as evidenced by the provision’s findings) to strip our surveillance laws of all public processes. Even if you don’t particularly care about cryptocurrencies, this encroachment on basic privacy rights must be opposed. That’s the gist of it, continue reading for the details.

Details of the provision

In summary, the provision would do two things:

We’ll look at the process changes first and then the new “transmittal of funds” special measure second.

Below, the current law is redlined to show how it would read if this new provision was to be passed into law. It shows specifically the procedural changes proposed to subsection (a). As is plain, the deletion of section (2) removes a requirement that prohibitions (subsection (b)(5)) be imposed by regulation only, such that any special measure can be imposed “by order, regulation, or otherwise as permitted by law” (the new language at the top of (a)(1)). “Otherwise permitted by law” is a regrettably common catch-all in legislation which basically means “if the Department’s lawyers can find a credible authority anywhere on the books to do something, then they can do it. Rather than have a specific process for imposing these harsh and constitutionally suspect controls, says the proposed law, any process will do. It’s a legal kludge.

The deletion of section (3) removes the 120-day duration limitation for special measures imposed without regulation (which can now be any/all of them). 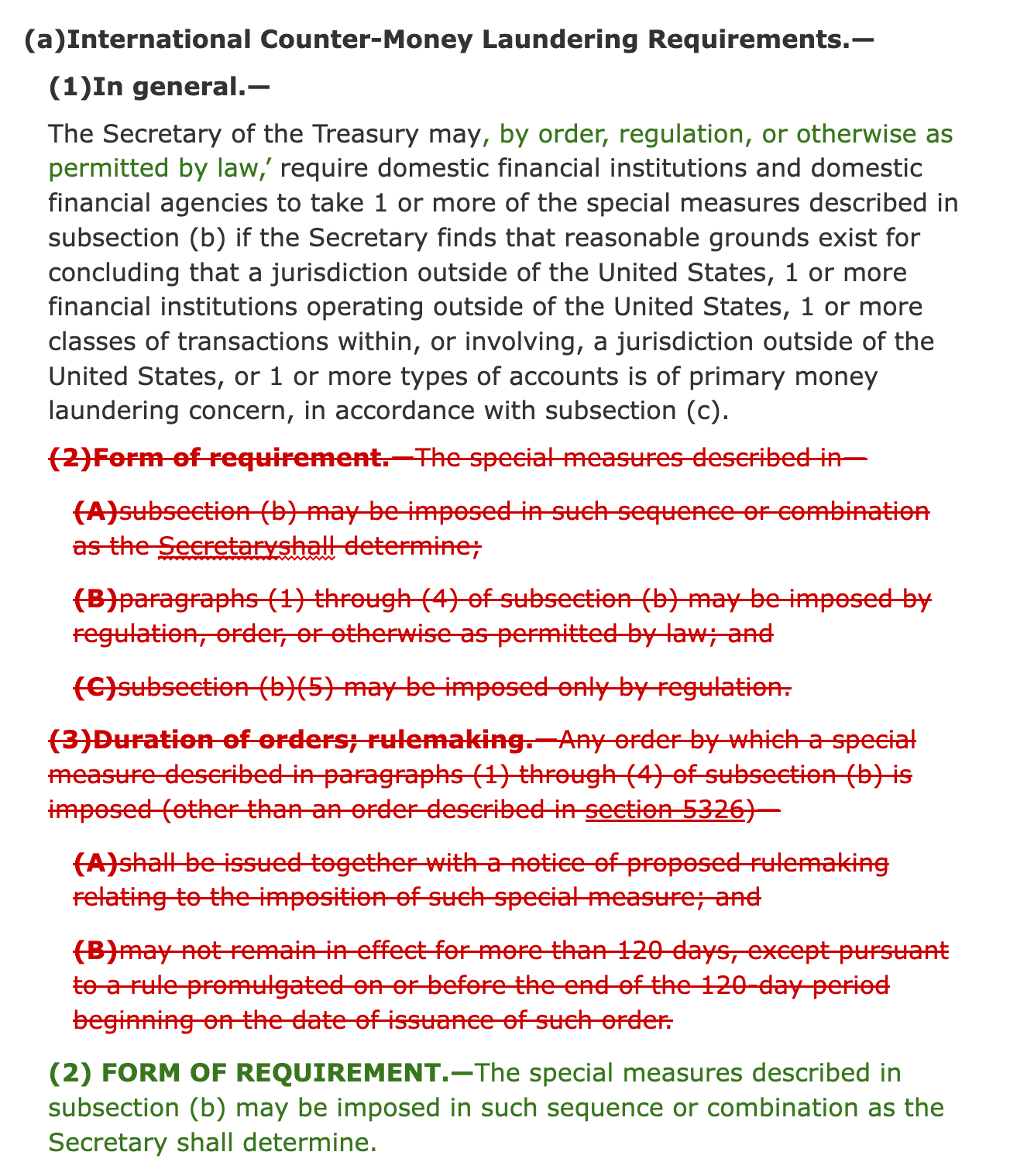 Together, these changes mean that the Secretary would be able to (a) impose measures against financial institutions through any process (even a phone call from a deputized prosecutor would likely suffice given these non-existent procedural safeguards), to (b) avoid any public notice and comment process to alert the public to measures and solicit feedback, and (c) make these measures apply into perpetuity even if they haven’t been made through regulation.

That language is unwieldy but plainly allows the Secretary to forbid domestic financial institutions from doing anything—so defined by the secretary as a “transmittal of funds”—if the Secretary finds that thing to be a primary money laundering concern that is ostensibly related to a transaction, account, person, or institution in a foreign jurisdiction.

This amendment offers the Secretary an entirely unchecked power to secretly ban or condition any transaction at any domestic financial institution. It is a dangerously authoritarian approach to solving money laundering concerns. Additionally, the delegated power to the Secretary to arbitrarily define and redefine the term “transmittal of funds” is an offense to our separation of powers and the rule of law. Congress and Congress alone is empowered by our constitution to make law; handing unelected officials at Treasury an ambiguous power to decide that certain customer activities at banks and other financial institutions can be blocked one day and not blocked the next is unconstitutional, unfair, and exactly what you would expect from a totalitarian regime, not from a well-functioning democracy.

We previously worked to successfully exclude a version of this provision sponsored by Rep. Jim Himes from the National Defense Authorization Act, which passed late last year, and we thought its anti-democratic deficiencies were now clear to folks in Congress. Unfortunately, it’s back essentially unmodified and now snuck into a high-priority bipartisan bill with a good chance of passing both houses of Congress. We will again work to make sure that all members of Congress understand what a massive and ill-considered change this innocent-looking provision entails, but this time we need your help. Please call your member of Congress and ask that they take action to make sure that notice and comment and duration limitations are not removed from 31 U.S.C. § 5318A as the America COMPETES Act would do.