The differences between Bitcoin and Libra should matter to policymakers

Recently Congress has taken a strong interest in the newly announced Libra digital currency. We have been getting many questions from policymakers and the media about how Libra (as described in its white paper and accompanying materials) compares to Bitcoin and other cryptocurrencies. We thought we’d share our thinking on this here.

Our answer is that Bitcoin and Libra are very different projects that use very different technologies and, as a consequence, each project faces different regulatory and legal challenges. It’s important that policymakers understand these differences so that they may appropriately tailor any necessary policy response. If they overlook these differences, policymakers risk adopting a one-size-fits-all response that would inevitably result in unintended consequences to the detriment of the public. So, we want to make sure policymakers don’t confuse Libra with Bitcoin and similar cryptocurrencies. Let’s look at the design goals of each project, the technologies they use, and conclude with a high-level comparison of the relevant laws and regulations.

To get a sense of their respective goals and priorities, it’s instructive to compare the first sentence of each project’s white paper.

Bitcoin: “A purely peer-to-peer version of electronic cash would allow online payments to be sent directly from one party to another without going through a financial institution.”

Take note that the same thing is being said four different ways. The key message is “money without trusted intermediaries.” Bitcoin is peer-to-peer, cash, direct, and without institutions. The design goals of Bitcoin prioritize building a payments network without trusted intermediaries over the network’s ease of use, stability, or scalability. The Bitcoin white paper says that people should have access to an efficient and fast online payment technology, but also that it’s more important for those payments to work person-to-person without reliance on any corporation or government than it is for those payments to be easy to perform. Bitcoin is a technological response to distrust in corporations and nation states, and was designed to work for a nation’s citizens even if that nation’s government became tyrannical, and even if that nation’s businesses and corporations were untrustworthy or monopolistic.

Libra: “The goal of the Libra Blockchain is to serve as a solid foundation for financial services, including a new global currency, which could meet the daily financial needs of billions of people.”

Take note that this sentence is all about scale and access. Libra should “meet the needs of billions”; it should be a “solid foundation” for a variety of “financial services,” not just cash-like payments; and it should be “global.” The design goals of Libra prioritize scale and inclusivity over the need to avoid reliance on trusted intermediaries.

Both projects take for granted that something is wrong with the current global financial system. The problem that Bitcoin seeks to address is the consolidated power of intermediaries in that system and the danger that such power poses: corporations and governments can arbitrarily block people from participating in the economy. The problem that Libra seeks to address is the inefficiency of intermediaries in that system and their disinterest in providing services to persons who are insignificant to their bottom line.

Bitcoin and Libra both use distributed ledgers (loosely called blockchains) to record payment transactions between users. In short, both projects intend to create money by sharing data over the internet. That’s generally where the similarities end.

Bitcoin is the first of a now broad class of innovations often called cryptocurrencies. It is money based on economic scarcity with transactions recorded on a censorship-resistant ledger that any anyone can both access (read data from) and append to (write data to). In other words, the Bitcoin ledger is public and permissionless. Libra is the latest of an older class of technologies often called digital currencies. It is money based on trust in an issuer with transactions recorded on a ledger that anyone can access and view, but only an authorized set of corporations can amend. In other words the ledger is public and permissioned.

Cryptocurrencies are defined by their lack of reliance on trusted intermediaries. While none of these terms are official or uncontroversial, we believe that Libra is not a cryptocurrency because of its use of a permissioned ledger and its reliance on a trusted issuer to hold and manage a fund of assets that back the currency. Libra is still part of the broader category of digital currencies along with airline miles, World of Warcraft gold, or Liberty Reserve Dollars.

Here’s a chart reiterating these fundamental differences in architecture: 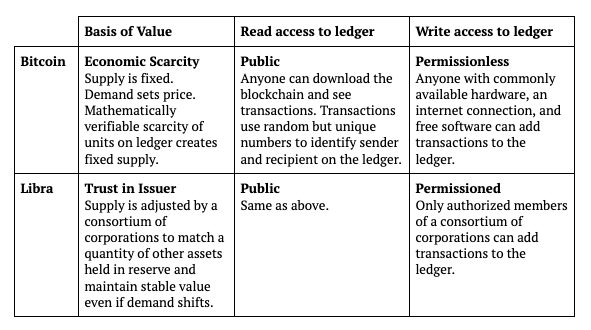 These varying architectural choices are not arbitrary. Bitcoin’s primary goal is to obviate the need for trusted intermediaries in online payments while Libra’s goal is to make online payments easier, more inclusive, and scalable. If you are willing to trust an issuer, then you can likely have a digital currency with less price volatility (because supply can be adjusted in response to shifts in demand). If you are willing to rely on a permissioned set of transaction validators, then you can likely get transactions validated faster and at a greater scale because fewer parties need to reach consensus. These are the assumptions inherent in Libra’s design. Bitcoin’s design is largely indifferent to these goals; its singular priority is to be resilient and unreliant on any such trusted intermediary. If that means that bitcoins will be more volatile in price, or that it will be more difficult to scale the Bitcoin ledger to several thousand transactions per second, so be it.

These choices also have consequences for how each project’s asset functions. Bitcoin ends up working like a bearer instrument: anyone who has the bitcoin automatically has the value. Libra ends up working like a registered instrument: the holder of a Libra really only has the value of that Libra if the official registrar, the Libra Association, says that they do and maintains the underlying reserve assets. Bitcoin, therefore, is censorship-resistant and functions like gold coins or any other valuable commodity. Libra transactions can be censored and the asset functions like a bank note or stock certificate.

Here’s another chart to illustrate how bitcoins and libras differ as assets:

Broadly speaking, financial regulations are in place to ensure that persons performing trusted roles within the financial system do not betray that trust. For example, if you are trusted with holding or managing someone’s wealth you should honor that trust and not enrich yourself at the expense of your customer. Bitcoin and similar cryptocurrencies are not designed to avoid regulation, but they are designed to minimize the number of trusted parties in an economic transaction. This is because the fewer the number of trusted parties, the fewer the number of parties that can pose a risk to users. A system without intermediaries is a system without intermediary risk, and thus no need for regulation aimed at safeguarding against the types of risk presented by intermediaries.

It stands to reason, therefore, that a true cryptocurrency will involve fewer regulated parties than a traditional financial service. Fewer but not none. Miners and software developers are not trusted custodians of people’s value, so it makes no sense to regulate them as we would regulate a bank or a money transmitter. Exchanges and custodial wallet providers, however, are indeed trusted by Bitcoin users, and therefore consumer protection and anti-money laundering regulation does apply to them.

Even miners and software developers may be subject to some regulations. While they have no more reason to know their customers than a safe manufacturer or a gold miner would have reason to know the people who store gold in safes, they may make warranties or other promises about the products they put into the world. Rather than subjecting these persons to ex-ante prudential regulations like bank chartering or licensing, regulations and laws create ex-post enforced obligations for them not to engage in fraud, breach of contract, theft, and unfair or deceptive acts and practices.

Securities laws exist to address information asymmetries between investors and persons trusted by investors to earn financial returns or manage a fund. Anti-money laundering regulations and sanctions laws exist because financial institutions establish customer relationships and can block the illicit flows of funds through their networks. While these regulations often apply to persons using Bitcoin to raise money (ICOs) or to offer exchange services (exchanges), there are obvious reasons why these regulations don’t apply to Bitcoin as a network writ large: Bitcoin doesn’t have a trusted institution minting it or a fund that backs its value. Bitcoin miners validate transactions but don’t establish customer relationships, and they don’t have the power to reliably block specific persons from sending money through the network.

Libra, on the other hand, is not designed to minimize the number of trusted parties in an economic transaction. Quite the opposite. Libra is designed to maintain a stable value and users trust the Libra Association’s management of a reserve fund to achieve that goal. Users also rely on the permissioned validators to add transactions to the ledger, and but for their participation a transaction would not go through. It’s still too early to say whether these trusted parties should or would be subject to securities or anti-money laundering law, but it might be hard to argue that they should not since with trust comes responsibility.

For a deeper dive on the concepts of permissionless vs permissioned blockchains, the technical details involved in their development, and their legal implications, check out the Coin Center report: Open Matters: Why Permissionless Blockchains are Essential to the Future of the Internet.